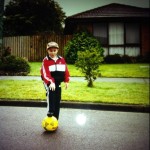 Voting has already began on the 2008 awards with the Best Kit Manufacturer already available to vote on.

The nominations are in for the Best Club Home Shirt with a final list of 12 shirts after so many nominations it had to be cut down to this amount.

The rules are simple:

One vote per user, youâ€™ll need to be registered to vote (click link in top left to do that, if you arenâ€™t already).

Also a special note the Manchester UnitedÂ Home ShirtÂ will not feature in the vote because it was created in 2007.

This classic Italian shirt just goes from strength to strength the red and black vertical stripes are a show piece of class by Adidas which designs the shirt extremely well. The team may be in the UEFA Cup but they can never complain about an ugly home shirt.

Arsenal’s home shirt features something a little different straying from the red shirt and white sleeves. It features red,white and black sleeves and side trimmings in a delightful effort by Nike.

Another fine vertical striped shirt and the best out of our first part on the Brazilian League. The shirt has been designed by Lotto and looks quite nice with the red sponsor going well with the black and white stripes.

The change from two stripes of each colour is different but effective just like the change in the Arsenal design. A nice shirt and another piece of creativity by the team at Nike.

Bayern Munich have offered a colourful and creative shirt. It features a red and white horizontal design in a style only Adidas can only pull off.

Nike have created a simple shirt for Boca that really works. The shirt shows off the traditional colours in a nice design that makes the sponsor work well with the shirt so often the key.

Nike have created yet another simple but effective shirt. The logo’s are excellently positioned the sponsor gels well and the use of blue on the neck and side trimmings goes a treat.

The simplest shirt of the 12 on offer but it offers just as much as the rest. A traditional shirt that features white with black trimmings. Logo’s positioned excellently and sponsor is perfect for the shirt.

Nike yet again featuring a shirt. A traditional design black and white vertical stripes that works so well with the yellow trimmings with yellow on the sponsor.

An interesting shirt that has plenty of colour. I don’t see it in the same class as Nike but they have done a nice effort with this shirt.

Canterbury don’t get involved in football shirts all that often but here is an impressive effort. The class blue of Portsmouth is finished nicely with gold trimmings and logical logo positioning.

A simple vertical striped design by Umbro but really effective. The shirt looks a lot better live than in the picture it really uses black and white well. The shirt may lack a sponsor but that doesn’t mean it doesn’t deserve a vote.

Its results time and not just the Oscars