Before Sergio Aguero in 2012, there was Colin Bell, who ended Manchester City’s 31 years of league title drought in 1968. Known for his incredible athleticism and limitless stamina, Bell led the Cityzens to multiple titles in the late 60s, winning the league in ’68, the FA Cup in ’69, the European Cup Winners Cup and FL Cup in ’70. Manchester City immortalises the success of Bell and his squad with the launch of the 2022/23 Puma home kit.

Bell’s son Jon said: “As a family, we’re incredibly touched that the Club and PUMA have chosen to remember the teams of the late 1960s and my dad with next season’s home kit – it’s a beautiful gesture.” 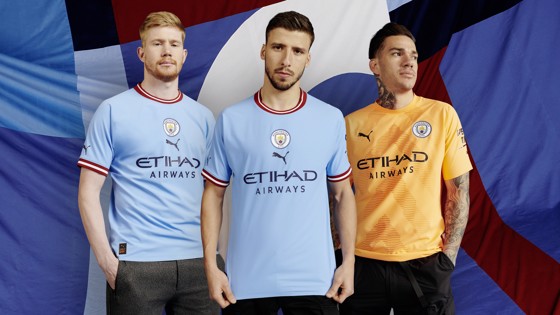 What was memorable on the City’s kits at that time was the maroon fold with white stripes around the opening of the socks. The said design gets revived in the new shirt, forming around the sleeve cuffs and round collar. The clean sky blue base is as traditional as you can get regarding Manchester City kits, though the upcoming home jersey freshens things up with all logos placed centrally on top of the other instead of the usual placements. The crown symbol inside the neckline honors ‘Colin the King,’ as Bell was fondly called by fans.