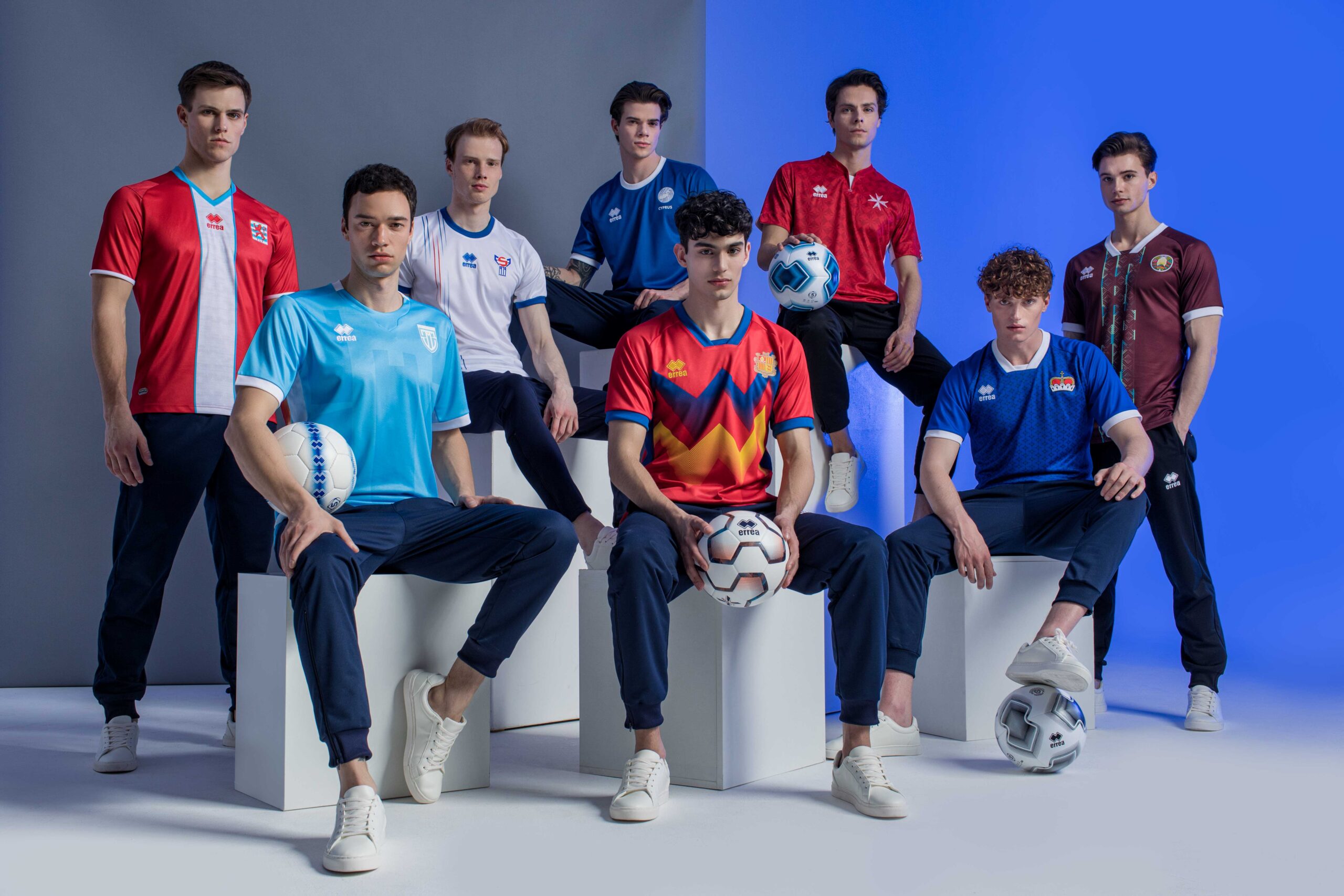 A year ago, Errea took over from Macron as the official partner of UEFA in the latter’s Top Executive Programme (TEP) Kit Assistance Scheme, a project that supplies kits to the smaller footballing nations. Today, the Italian sports company has released the home and away kits of the eight chosen teams for the program. Andorra, Belarus, Cyprus, Faroe Islands, Liechtenstein, Luxembourg, Malta & San Marino will have the outfits from 2022 to 2024 and have another set of home and away kits for 2024 to 2026, still courtesy of Errea. The Kit Assistance Scheme will help each federation save up to €300,000 each. More importantly, it will enable the nations to focus more on football-related matters that could make their teams even more competitive on the pitch. 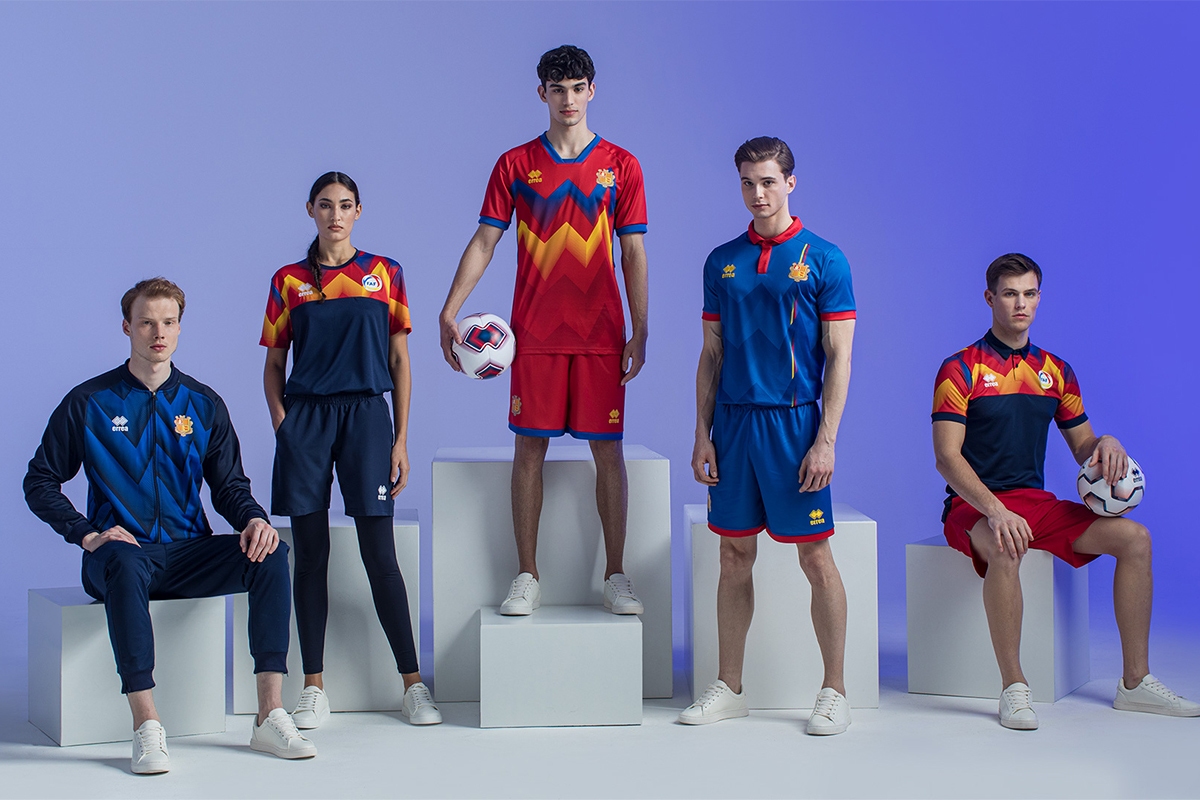 Errea has the Andorran team wearing a predominantly red home kit and a blue away one. The home shirt has zigzag geometrical patterns in blue, yellow, and a darker shade of red to get the colours of the Andorran flag represented. The away has a similar look but has the base in light blue and the graphic in a darker tone. Strips of thin yellow and red lines flow down from the left-hand side, once again incorporating the colours of the national flag. 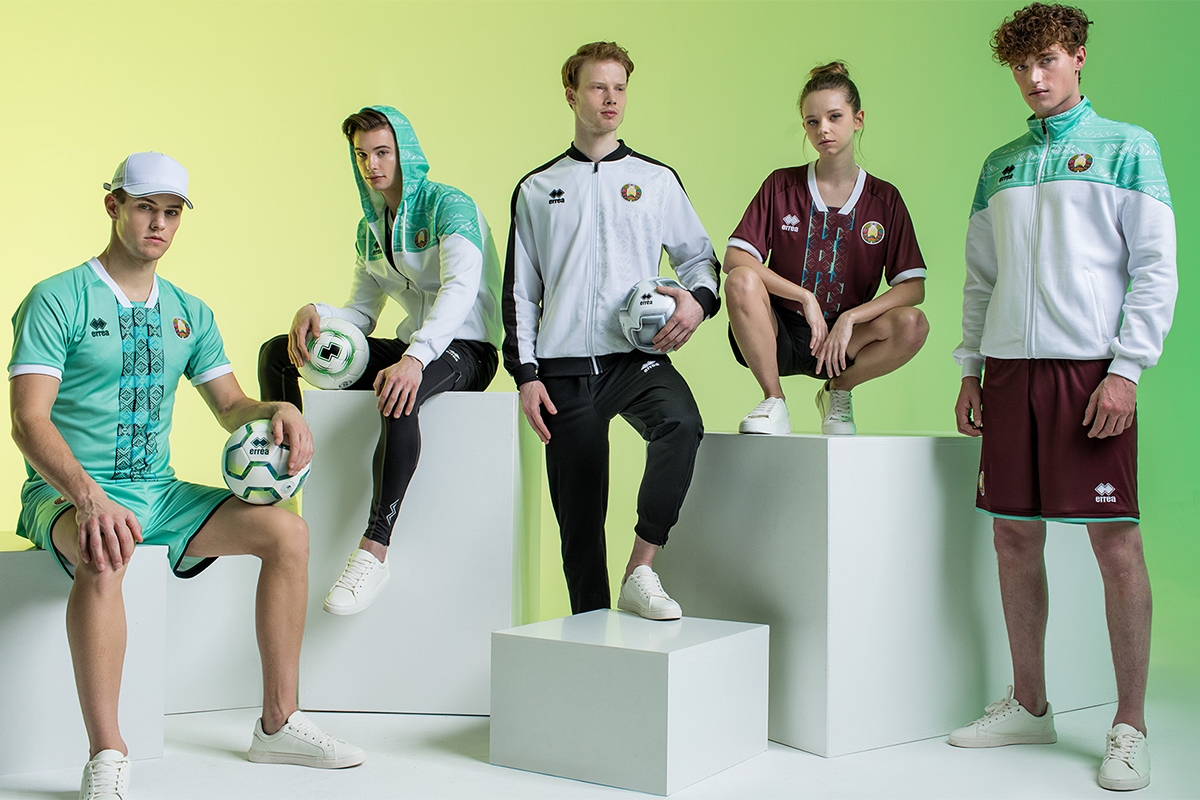 The central feature of the Belarusian kits is the band graphic flowing right down the middle of the front side. The visuals are representations of the traditional Belarusian ornaments and appear in a beautiful mint green against the backdrop of a garnet red home shirt. Because the away is predominantly mint green, the graphics switch to a black-and-blue colour combination. 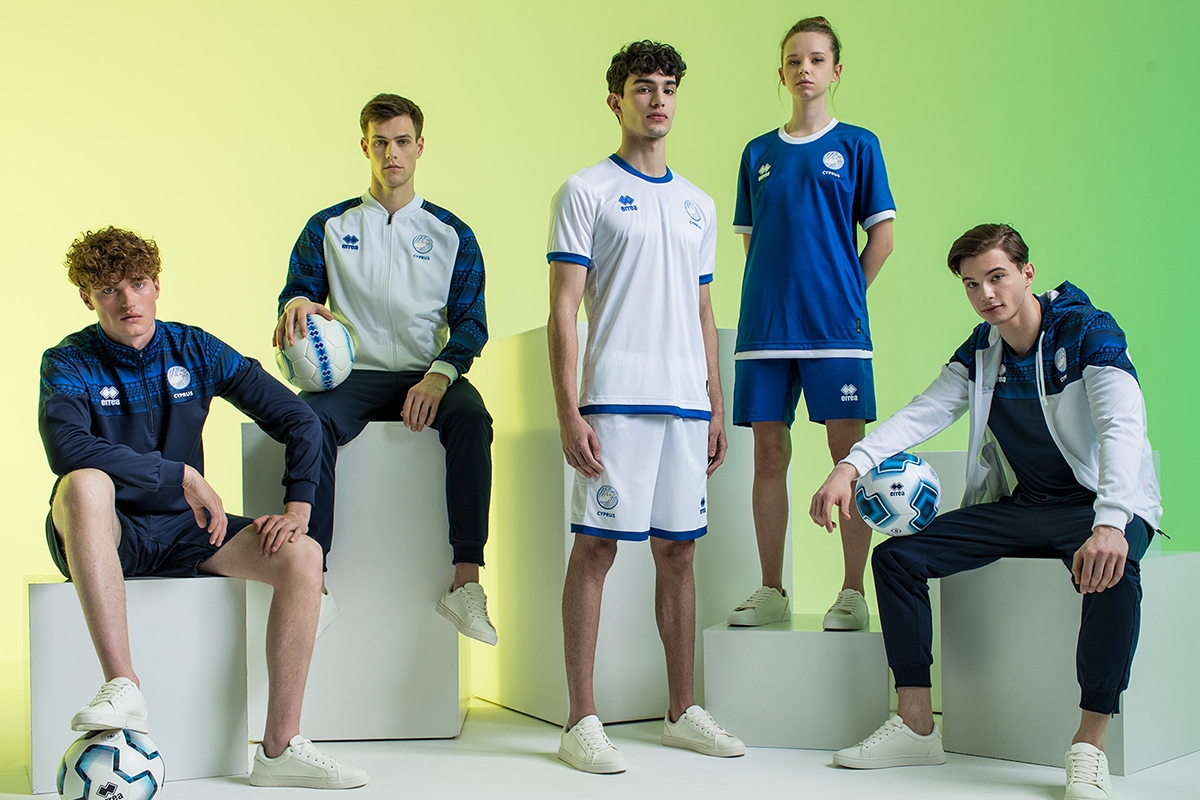 Cyprus will play their next two years with a predominantly vivid blue home and a pristine white away. The sleeve cuffs and round collar come in the colour of the opposite kit. Displayed in a matching shade, an image of the Cyprus island feature on the lower back and a recurring mosaic pattern (a tribute to the Villa of Theseus in the Paphos Archaeological Park) flows down the sides of both kits. 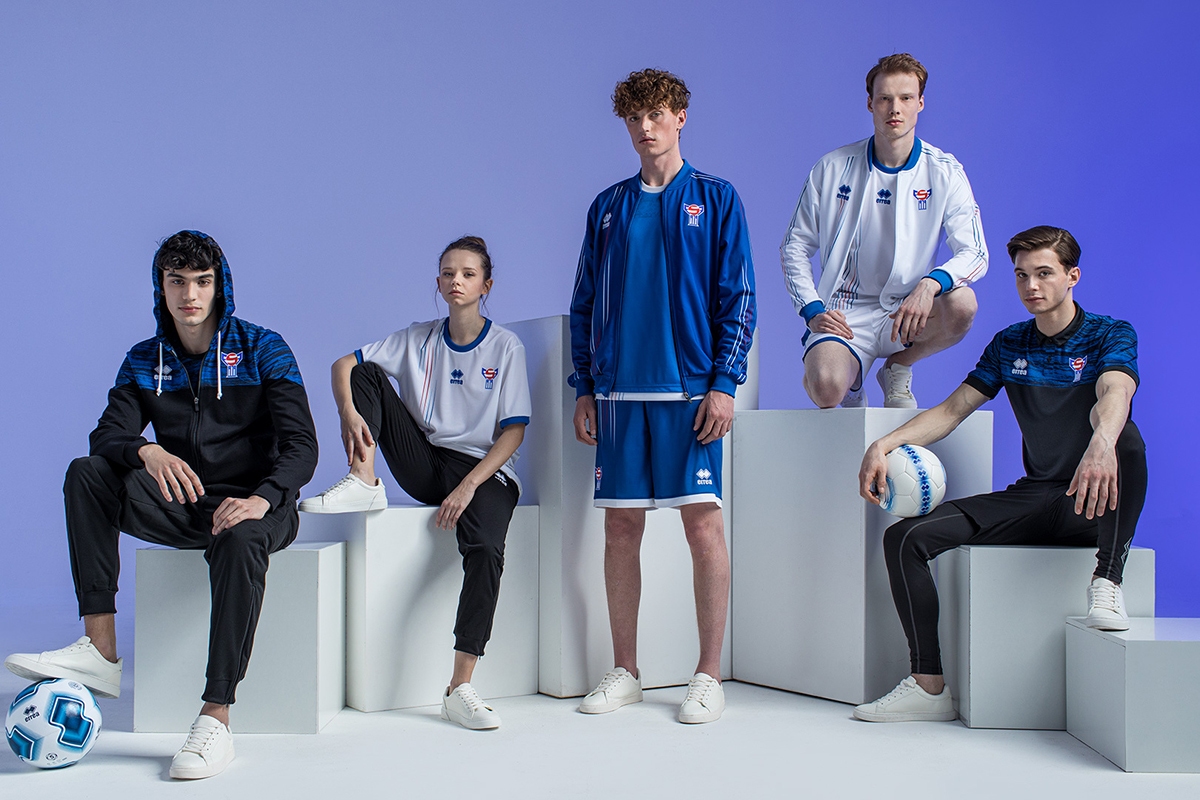 At first glance, the Faroe Islands and Cyprus uniforms look the same, as both teams opt for blue and white. But the former keeps things different by switching out the colours, using white for the primary strip and blue for the alternate. Additionally, there are defining graphics on the right-hand side of the said kits. The white shirt features blue and red pinstripes that abstractly fade out on random points, while the blue jersey emanates an artistic cross border that seems to pay tribute to the national flag. 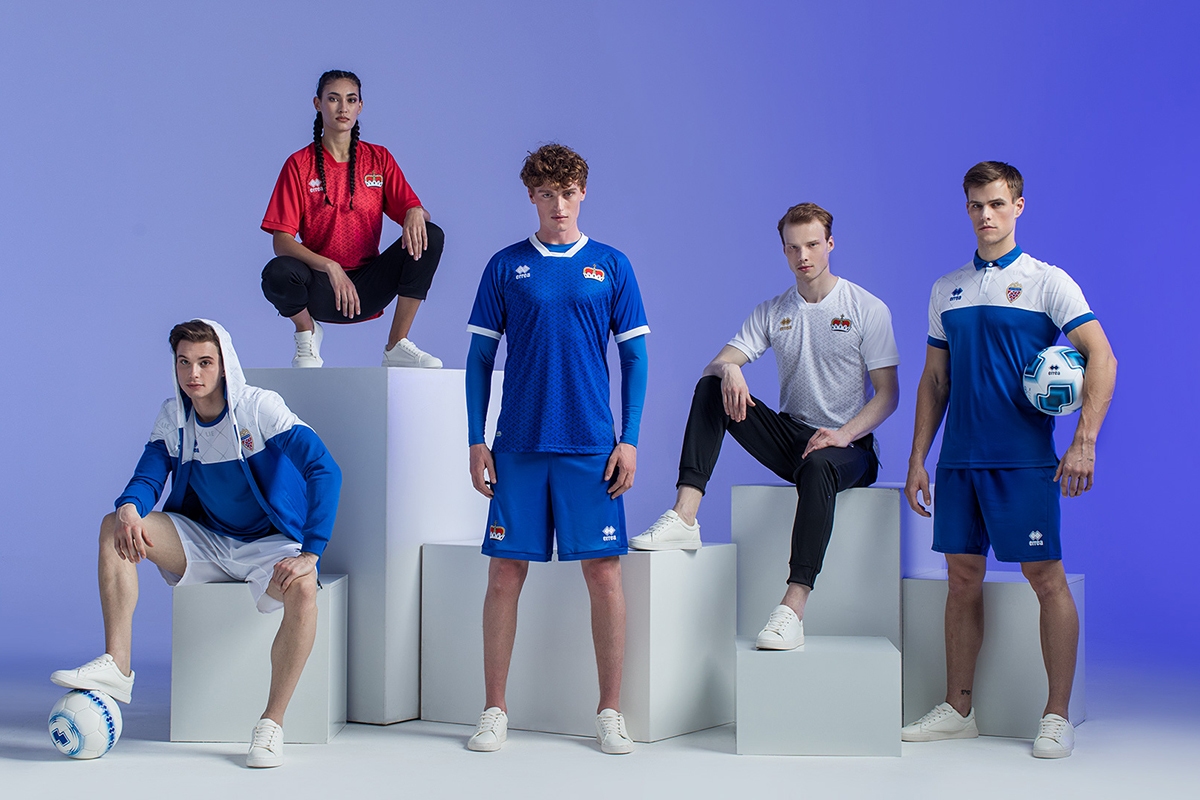 Liechtenstein kits (which include a third strip) will be blue, red, and white in succeeding order. The body panel features a tessellating diamond pattern akin to a damask while leaving the sleeves with a clean finish. 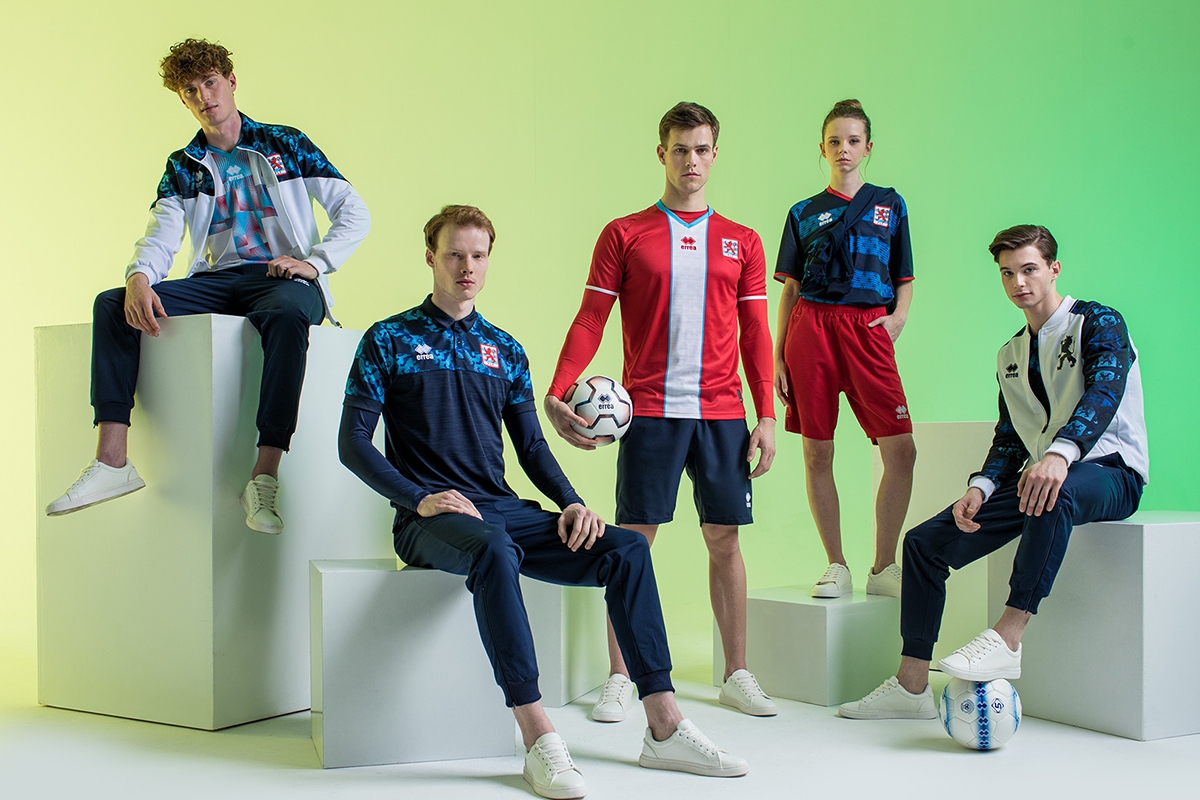 Luxembourg joins Liechtenstein and San Marino in having a third kit included in their Errea set. Its home shirt is red with a white central band flowing down the centre of the front side. The said band has light blue borders and features an image of a lion, a symbol present in the nation’s coat of arms.

Its dark blue away shirt features contrasting light blue hoops with additional pinstripes and micropattern of lions housed within the said design elements.

Lastly, the third shirt has a distinctive cross against a white background, with the said visual graphic consisting of a geometric pattern of red, blue, and white lines. 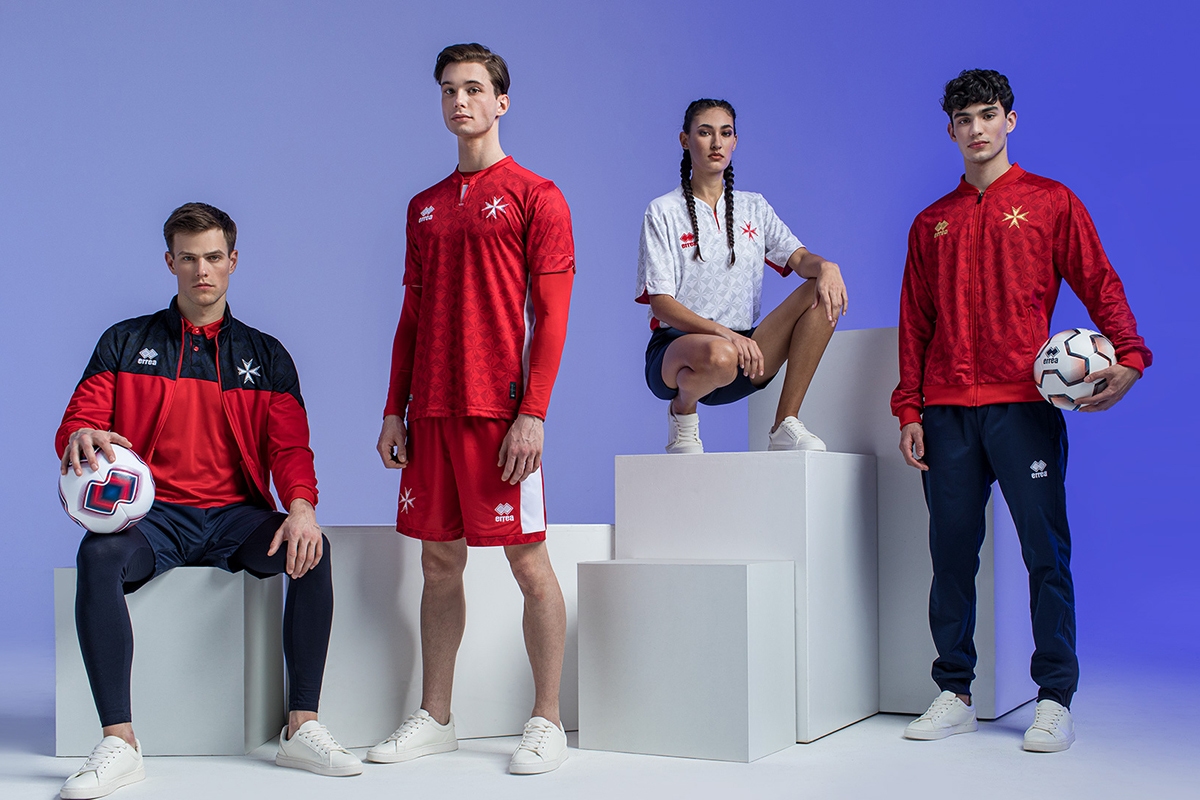 Malta’s red home and white away shirts feature an all-over repeating pattern of the Cross of St. John, also known as the Maltese cross. The kits have side strips of opposite colours. 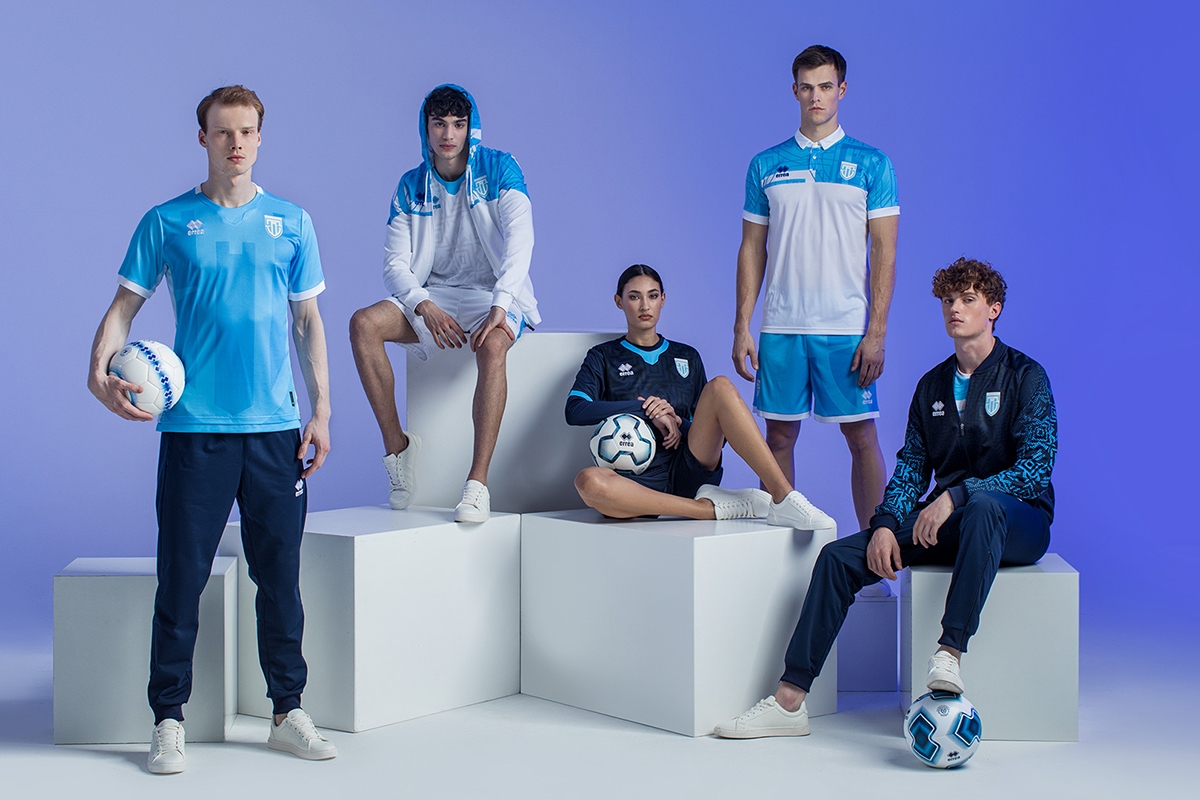 The San Marino home shirt is predominantly sky blue and depicts a stylised conceptualisation of the (Guaita, Cesta and Montale), a symbol of the oldest Republic in Europe. On the other hand, the away and the third strips, the former with a dark blue base and the latter a white one, display a pattern that is a clear tribute to the frescos in the Council Chamber of the Public Palace.